Skip to content
Valley Electric Association, Inc. > About Us > Board of Directors > Leadership Team > Mark Stallons 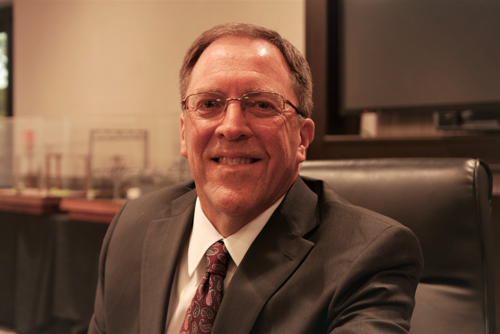 Mark Stallons took over as Chief Executive Officer of Valley Electric Association the first week of January 2020. The openness and honesty expressed by the Board of Directors during his recruitment was refreshing. “I was drawn to their transparency and honesty. I believe in that,” says the veteran of three decades of cooperative management in the Midwest – most recently in Kentucky. “You build trust by being open. Look at the (VEA) website, and you can see how real that commitment is.”

An organization’s success depends on more than transparency, however, and Mark is a believer in the adage that what gets measured gets managed. “Accountability equals measurement.”
Board President Kathleen Keyes of District 4 (Fish Lake Valley) says Mark checked all the right boxes.

“Mark has the strong leadership skills, extensive cooperative knowledge and the experience that we were looking for, but his personality sealed the deal,” says Kathy. “The Board of Directors chose Mark because we believe that he is a good fit with our employees, will communicate very well with our members and has the ability to lead VEA to a sound financial future.”

Mark believes in an organization’s ability to solve challenges by acting strategically. “The formula for success revolves around strategy, teamwork and accountability.”

Mark comes to Pahrump from Owenton, KY, where since 2009 he served as President and CEO of Owen Electric Cooperative. Owen is located between Lexington and Cincinnati and has 62,500 members, a $180 million operating budget and 135 employees.

“Every organization has challenges, which I view as opportunities,” says Mark. “In times of difficult challenges, leadership, teamwork, development and problem solving are necessary. In the last few days, I have met employees who are eager to work together and build an electric cooperative that is member focused, looking ahead and leading by example. I see huge potential in Valley Electric.”

Mark considers himself a student of leadership and management. He lists James C. Collins, co-author of “Built to Last: Successful Habits of Visionary Companies” and “Good to Great” among his favorite authors.
VEA will be the fourth co-op Mark has worked at since the early 1990s. Though there are similarities among them, every Co-op is different, says Mark, and he was attracted by Valley’s investment in high-speed broadband. There will be a learning curve, he says, “and I need to learn as much about Valley as fast as I can.”

Mark has served on several leadership committees for the National Rural Electric Cooperative Association (NRECA), including the Legislative Committee, where he was Vice Chairman; the Resolutions Committee; the Energy Innovation Task Force and the Regulatory Committee. In Kentucky, he was a member of the Governor’s Energy Efficiency Task Force. He is a member of the Touchstone Energy Board of Directors.

Before joining Owen Electric in 2009, Mark spent six years as Executive VP and General Manager at Egyptian Electric Cooperative in Steelville, Ill. From 1994 to 2002, he was Vice President of Operations and Power Supply at Midwest Energy Cooperative in Cassopolis, Michigan.

Mark and his wife, Judy, are outdoor enthusiasts, both enjoying hiking and kayaking. They also enjoy travel as time permits and have been to 44 states, Israel (twice) and Egypt. They hope to one day to visit Alaska and Europe.

Mark says he enjoys listening to contemporary gospel music and classic rock. The Stallons are Methodists, and Judy is a United Methodist minister. They have two sons, Jason (Vicky), a physical therapist for FC Cincinnati, the MLS soccer team and Benjamin (Samohya), a high school biology teacher in St. Louis. The Stallons have five grandchildren and another on the way.

A native of East St. Louis, Ill., Mark, 62, is a sports fan who follows the St. Louis Cardinals in baseball, the University of Kentucky in basketball, Ohio State in Football and FC Cincinnati in soccer. An avid reader, he also enjoys reading adventure novels and historical biographies. He will pick up anything written by John Grisham, Clive Cussler, David Baldacci, Vince Flynn or Patric Lencioni.

Mark has a bachelor’s degree in electrical engineering from Ohio Northern University and an MBA from the University of Dayton.