Skip to content
Valley Electric Association, Inc. > About Us > Board of Directors > Executive Team > Dick Peck 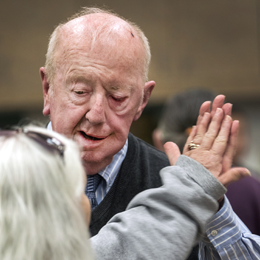 Richard Peck only plans to be in Pahrump for a few months, but he intends to leave his mark in the short time he is here. A longtime utility executive, Dick was named interim Chief Executive of Valley Electric Association in February.

Peck, of Kenai, Alaska, is the owner of Utility Innovations Plus, a management consulting and renewable energy business.

“I am happy to be in Pahrump, and I believe I can be of assistance to Valley Electric,” says Dick. “I think I can be most helpful as a resource to staff and to the Board. When a utility is in stress – whether it be financial or political – that’s what I am drawn to.”

Peck’s 47-year career in public power has included 24 years as a CEO of rural utilities in the West and four years of international consulting in South America and South East Asia. He started his public power career in October 1969 at Homer Electric Association in Homer, Alaska.

In 2012 Peck was selected as Interim General Manager of Beartooth Electric Cooperative in Red Lodge, Mont., to assist the board on organizational and financial issues. Three years later, he returned to his Alaska home on the Kenai Peninsula to continue his consulting business after developing a management agreement for Beartooth Electric with Lower Valley Energy, a Wyoming Cooperative.

Peck was born and raised in the Pacific Northwest. He earned an AA&S in Electrical Engineering and a bachelor’s degree in Business from University of Central Washington in June 1969. He fell in love with Alaska while commercial salmon fishing in southwest Alaska. He returned to Alaska in May 2004 as Director of Unalaska Public Utilities.

Peck has been married to Vicki for 54 years, and they have three children and five grandchildren. He is a United States Marine Corps veteran and resides in Kenai, Alaska.