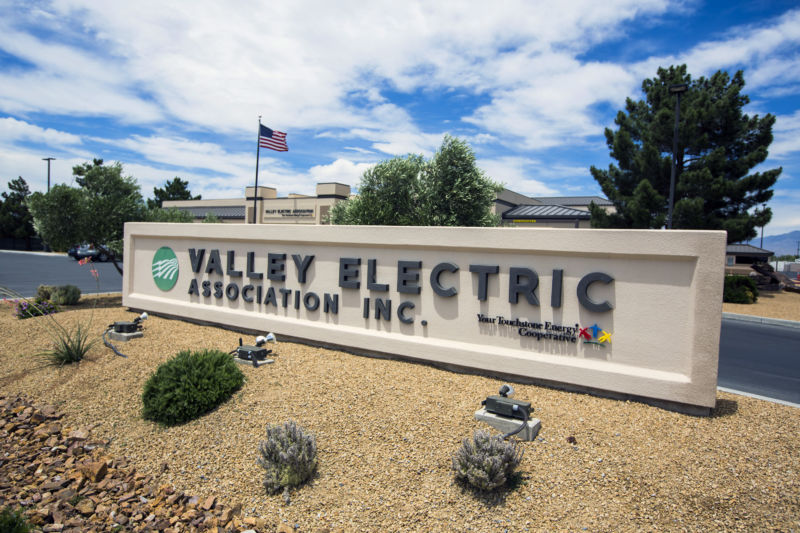 The rate adjustment is the first permanent electric rate increase in more than 10 years for Valley Electric consumer-members. In 2017 a temporary 9.9% rate adjustment was reversed.

“We only considered a rate adjustment after exhausting all possibilities for internal cost control,” said CEO Angela Evans. “A decade is a long time for a cooperative to hold firm on its rate structure, especially when the cost of providing service continues to increase.”

VEA’s new kilowatt-hour rates to consumers will still be below national and state averages, according to statistics from the U.S. Energy Information Administration.

The announcements followed an extensive evaluation of the Cooperative’s operations, which included the reduction of $11 million of annual operating expenses to bring them in line with revenue, said Evans. “Despite these efforts, additional adjustments were required.

“The difficult decision to eliminate jobs of dedicated VEA employees was made after an exhaustive review of the entire organization,” said Evans. With the 2018-19 personnel cuts, VEA will be staffed at levels on par with 2016. “We believe that with these reductions VEA’s workforce is ‘right sized’ to provide outstanding service to our members at affordable, competitive rates,” said Evans. The job cuts followed a voluntary separation program in January in which 16 employees left the Cooperative.

“As CEO it is my responsibility to ensure Valley is delivering high quality services to our members, executing on our operating plan that drives growth, maintains appropriate headcount, and controls costs. I’ve been tasked with evaluating every area of our business to establish a clear set of priorities and a more efficient organizational structure.”

“We are grateful for the efforts and contributions these staffers made to Valley,” said Evans, “and we are committed to treating everyone with respect and dignity as they transition to new opportunities.”

Immediately upon appointing Ms. Evans as interim CEO, the Board of Directors engaged the accounting firm of Hinton Burdick to conduct a transitional audit of financial activities (internal controls, cash activity and expenditures) for the period of January 1, 2016 to July 31, 2018.  From the Board’s perspective, a forensic review of VEA’s financial activities was critical in order to have an absolutely clear financial picture of VEA.  Hinton Burdick found no wrongdoing or mismanagement of funds – including the funds resulting from the transmission sale.

Specifically, as to the worry that there must be missing funds, Hinton Burdick found “no significant transactions lacking supporting documentation, or of an unidentifiable nature, were noted.”

“We are committed to immediately correcting the minor concerns and opportunities for improvement raised by Hinton Burdick, and welcome any suggestions from any members on this front,” members of the VEA Board said in a statement.

To read a copy of the audit letter CLICK HERE.

Soon after taking over in mid-2018 as interim CEO, Evans began a thorough review of the Co-op’s operations.

“Our cost of providing service and staffing levels at Valley had risen faster than we have executed on strategic growth objectives,” said Ken Derschan, VEA Board President. “That is why we directed Angela to conduct an examination of operations and shore operations up to meet our current business needs and cut costs throughout the cooperative.”

The Facility Charge is built into members’ monthly energy. It represents funds necessary to build and maintain the equipment, lines, poles, substations, and run the cooperative. It is a flat fee – although the fee is different for each billing class; residential, commercial, large power or industrial.

“The Facilities Charge ensures that your expectations for continuous power and outstanding customer service are met,” said Evans. “It gives each member a fair and equal share in the cooperative’s operation, and it provides funds that must be invested now to ensure that electricity is delivered now and in the future.”

The Energy Charge is designed to recover variable costs. Charges are based on members’ electricity consumed in kilowatt-hours (kWh) in a given billing cycle. This charge is calculated by multiplying the number of kWh consumed during a billing cycle by your rate for energy in terms of cents per kWh.

The operations review led by Evans began in May and included re-evaluating priorities, strategies, finances, budget, staffing, the scope of work being performed by external consultants and operational expenses. The VEA Board of Directors approved business improvements identified and implemented for the second half of 2018. The improvements reflected revised priorities and significant reductions in operating expenses.

Several priorities were addressed in the operations review:

Fiber to the Home

While still pursuing a strategy of connecting high-speed Internet, the deployment of “fiber to the home” has been scaled back. Construction plans for 2018 had included the build-out of large areas of Pahrump, a huge capital investment and commitment.

“We determined that a more tactical approach would be to scale back the fiber build-out and concentrate on areas that will generate revenue,” said Evans. While 90 percent of the backbone structure is in place, extending the fiber to reach individual areas can cost more than $100,000 each. It is difficult to justify such costs with members.

VCA targeted fiber installations in Mountain Falls and Winery Road areas in Pahrump and the town of Beatty beginning in June. Focusing on those areas, where the homes are in in close proximity, holds down construction costs and allows for a faster return on investment.

“For some members who prefer fiber over fixed wireless broadband for high-speed Internet service, fiber will arrive later than we had hoped, but it is still coming,” said Evans. “We regret the delay, but we also believe it is the correct way to deploy our resources.”

As a significant area in reducing expenses and refocusing resources for broadband infrastructure construction, VCA has reduced its dependence on outside contractors. Engineering and construction work is now being handled in-house. “We have really been impressed with our linemen volunteering to be part of the solution,” said Evans.

Valley Electric managed to keep energy rates stable during the recession of 2008 and the decade-long recovery by managing the Co-op’s power purchase contracts. “In order to protect our member-consumers during the recession, power supply costs were pushed into the future,” said Evans.

However, the cost of extending contracts resulted in the escalation of baseload energy supply contracts pricing that were effective in 2018 energy pricing.

“Eventually you have to pay the piper,” said Evans. In June, the Co-op used $60 million in proceeds from the 230-kilovolt transmission sale to get out of the contracts and keep energy rates stable. The new power deal started delivering lower priced power in June.

During the review of cooperative expenses, a number of cost-savings opportunities were identified. More than $5 million in annual cost savings were implemented during the last half of 2018, and approximately $6 million more will be trimmed in 2019 for an annual savings of $11 million.

Evans said the Cooperative also plans to sub-lease its Las Vegas office as a cost-cutting measure.

“We have a good understanding of how the Cooperative looks today and how the future is shaping up,” said Evans. Costs are being adjusted accordingly.

The Board named Evans as permanent CEO in October 2018.

“Revenue generation continues to be important as we move forward to ensure that we can meet our responsibilities to our members, our partners and our employees,” said Evans. “VEA will continue to be a leader among cooperatives. Our determination and our dedication will allow Valley and its family of subsidiaries to meet the challenges of the future as a stronger Cooperative.”

For a complete breakdown of the new VEA rate schedule CLICK HERE.

Valley Communications broadband rates can be found by CLICKING HERE.