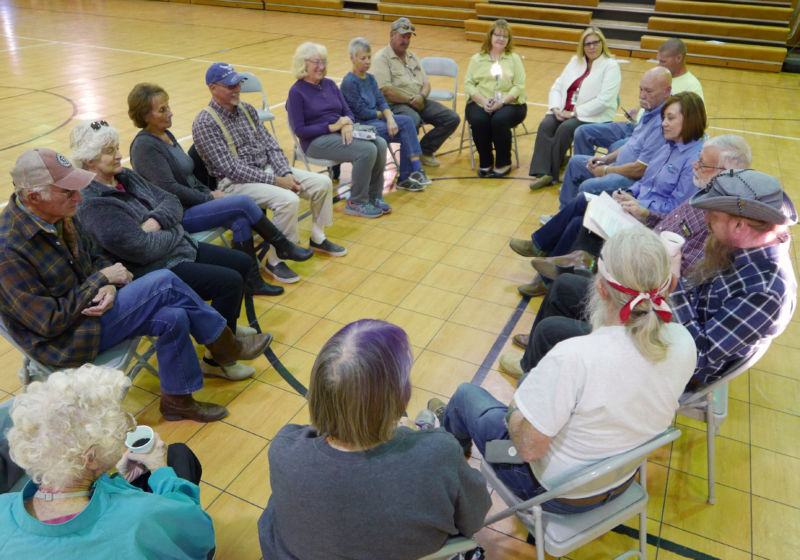 During stops in communities throughout Valley Electric Association territory in December, CEO Angela Evans provided updates on key initiatives and discussed the Cooperative’s mission and vision under new leadership.

Members asked questions on topics ranging from solar energy to service reliability to high-speed broadband, to Energy Choice and renewable portfolio standards. The visits began Dec. 5 in Pahrump and ended on Dec. 14 at Fish Lake Valley.

Angela was named permanent CEO in October after serving from May until October as interim CEO. Previously she had served as Chief Operating Officer of VEA. Board members said they have been impressed with the speed at which changes at VEA were identified and implemented by Angela.

“Immediately I felt that it was important to understand the direction the Board shaped for the Cooperative and to begin developing a collaborative relationship with the Board,” said Angela, referring to the early days of her tenure as interim CEO. “Our consumer-members look for transparency and trust in a person selected by the Board to implement the objectives of the Board.  My relationship with members is equally critical, and I have sought to build bridges with members.”

While in the interim role, Angela directed a thorough review of the Co-op’s operations, which included re-evaluating priorities, strategies, finances, budget, staffing, the scope of work being performed by external consultants and operational expenses. The Board approved business improvements Angela identified and implemented for the second half of 2018, which reflected revised priorities and significant reductions in operating expenses.

Fiber-to-the-Home construction. While still pursuing a strategy of connecting high-speed internet, the deployment of “fiber to the home” is being scaled back. Construction plans for 2018 had included the build-out of large areas of Pahrump, a huge capital investment and commitment.

“We determined that a more tactical approach would be to scale back the fiber build-out and concentrate on areas that will generate revenue,” said Angela. While 90 percent of the backbone structure is in place, extending the fiber to reach individual areas can cost more than $100,000 each. It is difficult to justify such costs with members.

VCA targeted fiber installations in Mountain Falls and Winery Road areas in Pahrump and the town of Beatty beginning in June. Focusing on those areas, where the homes are in in close proximity, holds down construction costs and allows for a faster return on investment.

“For some members who prefer fiber over fixed wireless broadband for high-speed internet service, fiber will arrive later than we had hoped, but it is still coming,” said Angela. “We regret the delay, but we also believe it is the correct way to deploy our resources.”

In response to a question, Angela said the Board is studying rate structures, and a broadband rate adjustment is under consideration.

Utilization of external consultants. As a significant area in reducing expenses and refocusing resources for broadband infrastructure construction, VCA has reduced its dependence on outside contractors. Engineering and construction work is now being handled in-house. “We have really been impressed with our linemen volunteering to be part of the solution,” said Angela. During a town hall meeting at Beatty on Dec. 12, members complimented district employees Danny Rogers and Dillion Leiper for their work with the community.

District 3 Director Rick Johnson agreed and added that Angela had made a smooth adjustment from COO to her new role as CEO. He said he has been impressed with the speed at which she has brought change to the organization. “She is a very experienced utility executive, and she has done a great job these past six months.”

Power Purchase Agreement. Valley Electric managed to keep energy rates stable during the recession of 2008 and the decade-long recovery by managing the Co-op’s power purchase contracts. “In order to protect our member-consumers during the recession, power supply costs were pushed into the future,” said Angela.

However, the cost of extending contracts resulted in the escalation of baseload energy supply contracts pricing that were effective in 2018 energy pricing.

“Eventually you have to pay the piper,” said Angela. In June, the Co-op used $60 million in proceeds from the 230-kilovolt transmission sale to get out of the contracts and keep energy rates stable. The new power deal started delivering lower priced power in June.

Internal controls reduce expenses. During the review of cooperative expenses, a number of cost-savings opportunities were identified. More than $5 million in annual cost savings were implemented during the last half of 2018, and approximately $6 million more will be trimmed in 2019 for an annual savings of $11 million.

“We have a good understanding of how the Cooperative looks today and how the future is shaping up,” said Angela. Costs are being adjusted accordingly.

During the Dec. 11 meeting at Amargosa Valley, District 2 Director Dave Hall said the Board has benefited from the collaboration between the new CEO and the Board. “Valley has a history of being at the forefront of technology,” said Dave, and Angela is committed to technology.

Recreation Center. It was not the Board’s intent for VEA to lead the development of the community center. The development of the center should involve the community. As such, it is being driven by a group of community leaders who are in the process of assessing community needs, establishing a trust, and developing funding and operational strategies for the community venue. VEA will continue to support the committee’s work. Meantime, VEA pledged to contribute funds and property at the right time and when members are in agreement.

Focusing on Core Values. Though strategies and priorities can change, Angela said the Cooperative needed to identify core values – Safety, Integrity, Cooperative Social Responsibility and Excellence – and make certain they are front and center in the Co-op’s culture.

Reliability. VEA always has been committed to reliability, and members in Fish Lake Valley said system improvements during 2018 in Esmeralda County have made a big difference in their area.

Planning for the Future. The Board’s strategic planning exercise in June included the assessment of the current business environment and defining the cooperative’s mission and vision. VEA’s mission is to improve the quality of life in communities and the vision is to empower VEA communities to achieve their potential. Angela then led the executive staff through a rigorous planning session that was linked to the Board’s plan and intended to create tactical actions in the implementation of the Board’s strategic objective.

During the Dec. 5 meeting at Pahrump, Board member Dave Dawson said Angela “believes that the Cooperative’s focus should always be on member-consumers and delivering to them the most affordable, most reliable services whether that service be electric or communications.

“That is why we hired her.”