In those hard-bitten early days, what a hungry Tim Hafen dreamed about most was something as simple as a hamburger and milkshake.

The year was 1951, and Tim was a rangy 19-year-old cowboy who had grown up on a dairy farm in Mesquite. Then his father got the chance to buy 840 acres across the mountains in the desolate Pahrump Valley and quickly decided to send his oldest son out there to handle the homesteading.

Back then, the valley was part of Nevada’s untamed frontier, home to just 150 isolated ranchers and farm workers. Maxwell Kent Hafen, known to folks as “Tim,” had just gotten married and was the father of a newborn daughter. He had once thought of becoming a dentist to escape the drudgery of milking cows. But instead of any banishment, young Tim decided that the move to remote Pahrump was a God-given opportunity to work on his own to establish a real working farm.

Truth be told, compared to Mesquite, there was nothing out here. Ordering fast food remained a teenager’s dream because there wasn’t even a restaurant. The only store for miles around was a lonely post-office/trading post. Everyone did their part. Every week, resident Stan Ford set off northward across 30 miles of rock road to reach state highway 95, where he met the Reno-to-Las-Vegas bus line to collect the valley’s mail.

On July 2, 1951, the Hafens moved into a 25-foot trailer with no indoor plumbing, serviced by an old Army-surplus propane generator he prayed would survive – because there were no spare parts and no service. He hauled drinking water from a nearby well he and his father had drilled, hoping his pickup ran true. When something really went wrong, when one of the kids came down with a fever, he says, “you just waited until it broke and got on with it.”

These were the early days of Nye County’s largest community, long before the casinos and housing developments and steady suburban sprawl.

Tim Hafen is one of its pioneers.

He recalls how he and then-wife Eleanor attended high school with soon-to-be doctors and lawyers. “And suddenly we were out there, as the expression goes, pecking among the chickens.”

Nearly 70 years later, Tim lives in a red-ochre 4,000-square-foot southwestern-styled home not far from where the old trailer once sat. He’s spry at age 86, a successful cotton and alfalfa farmer-turned developer, an outspoken community leader who served multiple terms on Valley Electric’s Board of Directors and eight years in Nevada’s General Assembly.

When local folks want to know about those hardscrabble early days, they ask Tim. He’s been interviewed numerous times and in 2015 gave a talk before the Pahrump Valley Historical Society about living the hard life off a high-desert claim in an era before modern niceties.

He likes to tell the old stories because it reminds him how far the community has come.

In those first days, even driving was a chore. In the 1950s, ranch trucks didn’t have air-conditioning, so to keep the air circulating on 115-degree summer days, folks drove with the window’s open, soon becoming mummies covered in dust.

“So, we wrapped our better clothes in a sheet,” recalls Hafen, “and stopped at a service station in Vegas to change.”

In the early 1960s, residents passed a petition to form the unincorporated town of Pahrump. Ordinance No. 1 was that prostitution was outlawed within town limits. Still, brothel proprietors eventually found their way in, thanks to a homestead patented after the town boundaries were drawn.

Like most others, Tim accepted the world’s oldest trade, as long as the madams were good community members. He has a photo of himself standing with a laughing Beverly Harrell, owner of the Cottontail Brothel out at Lida Junction, who’d just bought a framed dried cow-patty painted to resemble a huge gold nugget as a way to help fund the fire department.

Electricity arrived in Pahrump in the mid-1960s, telephones a few years after. In 1965, the “Pahrump Special Telephone Directory” was a one-page sheet that included just 75 names, each with a four-digit number, many of those old timers now long dead. Tim’s number was 2061. 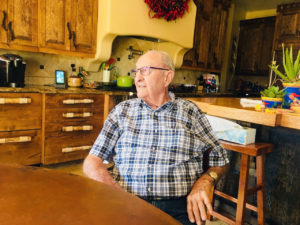 Residents also decided they needed street names because, as Tim puts it, “you couldn’t just tell people, go down that unnamed gravel road.”

Abe Fox, a Las Vegas delicatessen owner who owned land in Pahrump, had an ingenious idea: He placed a large map on a wall inside the school, on which people wrote in street names to commemorate their ancestors and children. Those names became a legacy to those who came here first, including Hafen Ranch Road.

In 1965, an early frost devastated his family’s cotton crops, just after they’d invested in buying the nearby Frehner ranch to augment their growing fields. Suddenly, Tim couldn’t pay his bills and asked a lawyer friend about filing for bankruptcy.

But Tim was stubborn. He wouldn’t leave the valley while owing money – “that was the one thing I wouldn’t do.”

He struck a deal with the bank not to foreclose and give him a chance to see things through.  He warned creditors that if he went under, they might at best get 25 cents on the dollar. “I just wanted a chance to pay them back,” he says, “and they’d look at me and say, ‘Well, I don’t have much choice, do I?’ ”

Tim had every last one of them repaid within three years.”

The key to surviving Pahrump in those days, he insists, was perseverance.

“Lord, there were times that I would have left and done something else if I could have,” he says. “But there’s something about this place: Once it gets a hold of you, you can’t get loose.”