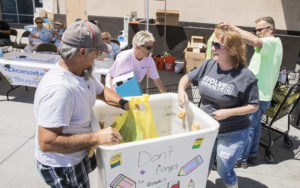 Valley Electric Association’s Fill the Bucket school supply drive surpassed all expectations in 2018, breaking the record of 37 buckets with a whopping 49.

The 12th annual Fill the Bucket School Supply Drive had VEA Ambassadors and employees working hard to collect supplies for the school kids Saturday, August 4, at three locations in Pahrump – Walmart, Smith’s and Albertson’s. With temperatures soaring to 104 degrees, volunteer Ambassadors and community members showed up to support the drive.

One bucket contains about 23 cubic feet of supplies. A bucket truck is a common utility vehicle equipped with an extendable hydraulic boom that carries a large bucket for raising workers to elevated, inaccessible areas, like power poles.

“We are so proud of what the community has done,” VEA CEO Angela Evans said. “Everyone made a great showing for the kids.”

VEA Community Relations Representative Ryan Muccio said it was unclear whether the record would be broken as the drive wound down. With just 20 minutes to go, the drive had collected 35 buckets. Then Walmart came out with a shopping cart full of supplies, which pushed the drive over the record of 37. Supplies purchased with cash donations drove the number of buckets to 49.

Angela proudly announced to KNYE Radio Host Karen Jackson that the record had been broken.

Angela thanked those people who gave generously at the stores.

Valley Electric partners GridLiance West donated $1,000, and JACO Construction came in with $500. Many shoppers handed over cash and encouraged volunteers to purchase supplies that were most in demand.

Fill the Bucket is all about helping school kids get through the year with adequate supplies. Angela said the supplies are used in VEA’s entire service area, from Sandy Valley and goes north to Fish Lake Valley. The service area covers three school districts, Nye County, Esmeralda and Clark County. All the supplies are sorted and then boxed by the VEA Ambassador Program and sent out to the various districts.

Nye County Schools Superintendent Dale Norton was grateful for all the supplies VEA had collected and thanked the Cooperative’s members.

Dale explained that the supplies are distributed throughout the year when needed.