Like most elected officials in Nevada, U.S. Sen. Catherine Cortez Masto still drives to most of her visits to the state’s small towns and rural outposts.

But as an active member of the Senate Committee on Commerce, Science, and Transportation, she also realizes the importance of the state’s network of rural airports, which help facilitate everything from emergency medical services to improving business and tourism. 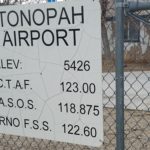 Cortez Masto in late July announced why she celebrated the Department of Transportation’s decision to provide nearly $5 million in federal grants through the Federal Aviation Administration’s for infrastructure improvement projects at five airports in rural Nevada, including the airport at Tonopah.

Cortez Masto traveled the state widely in eight years as Attorney General and has returned to the road repeatedly since joining the Senate in 2017. Although she’s flown into the airports in Tonopah and Carson City, she still rolls up the highway miles. In conversations with residents and local elected officials, improving airport infrastructure has been a recurring theme.

“It is such a vital life line,” Cortez Masto says. In an earlier news statement, she thanked the Department of Transportation and observed, “These funds will help improve the runways and taxiways at airports across our state, ensuring that Nevadans living in rural communities and those in the Carson-Tahoe basin have access to safe, state of the art transportation facilities.”

With vanishing Greyhound and Amtrak services, public transportation options are extremely limited in the state.

And those public airports and landing fields help provide a big boost to the rural economy. In a commentary in the Reno Gazette-Journal, Ely Airport Manager Lance Gale reminded critics of general aviation in rural areas that the airports not only provide a vital service to residents but generate more than $1.1 billion annually into the state.

He’s watched the taxiway deteriorate over time and considers it in “rough shape.” The main taxiway was last paved in 1981, and last seal-coated a decade later.

“We need to keep the runways up,” Peterson says. “We’re kind of out here in the middle of nowhere out here, and the keeping up the airport is important whether it’s for the air ambulances or for business. A lot of business flies in here.”

Tonopah Airport is slated to receive nearly half the grant dollars distributed to the state’s rural airports with $2.36 million coming to reconstruct and rehabilitate its taxiways. Other rural airports on the grant list range from Carson Airport and Minden-Tahoe Airport to Fallon Municipal Airport and the diminutive Alamo Landing Field, which is scheduled for a $150,000 taxiway and runway makeover. 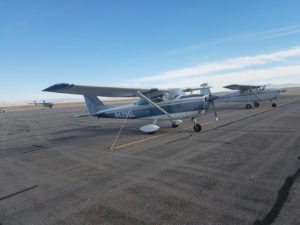 Cortez Masto says the Alamo field provides an example of the increased importance of maintaining airport infrastructure not just for emergency purposes, but for recreational and tourist visitation as well.

This is another way to not only bring people in and out of those communities, but it also enables people to come and see the beauty of the area,” she says, adding that during her discussions with locals, “One of the reasons why they want it is to bring more people into Alamo to experience the wonderful beauty of Alamo that most people don’t know.”

At Desert Flying Service, Peterson will be grateful if those care-worn taxiways are once again something Tonopah residents will be proud of.