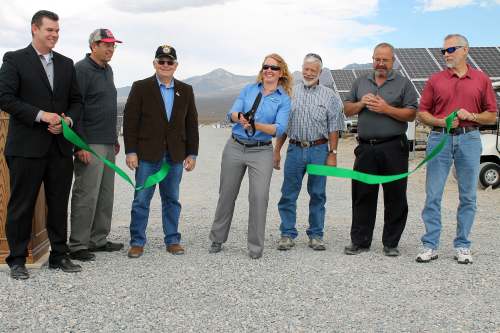 Solar Power to Brighten the Lives of VEA members

PAHRUMP, Nev. – Thanks to a 15-megawatt Community Solar Project that went online in October, Valley Electric Association members now receive power from the solar installation at no additional cost.

Ribbon-cutting for what is now the largest community solar project in the country was Sept. 28.

The plant is situated on 80 acres and will produce enough power for 2,500 houses at full output.

VEA partnered with Bombard Renewable Energy of Las Vegas. To minimize effects on environmentally sensitive plants and animals in the area, the U.S. Department of Fish and Wildlife assisted during construction.

Bombard will operate the plant, which was built on land owned by VEA. JBA Consulting Engineers of Las Vegas completed electrical engineering for the project.

The output from the project will be available only to VEA members and at a price lower than current electric rates, allowing consumers to experience the benefits of renewable energy without significant investments or long-term leases. The program will be available later this year.

“This is an important step for Valley Electric and our member-owners,” said VEA CEO Thomas H. Husted. “This is a project that truly stands alone. Our consumers want choice. It is clear that renewable energy is among the choices they want. This partnership allows us to better serve our members.

From left, Bo Balzar, Rick Johnson, Dave Dawson, Kristin Mettke, Dave Hall, Nye County Commissioners Dan Schinhofen and Frank Carbone”At VEA, we value innovation and member service.”Our status as a member-owned electric cooperative allows us to develop opportunities that promote local economic development while strengthening Nevada’s renewable energy industry. We are committed to positioning Nevada as a leader in the national renewable energy market, and this innovative endeavor serves as a benchmark for future community solar projects across the country.”Advances in photovoltaic technology helped make this project feasible, said Les Fernandez, senior electrical engineer for JBA Consulting. “The panels are really cool. There are no moving parts; there’s no required maintenance. You don’t even have to keep operators on site. You can monitor everything remotely, and if you see the panels are not performing, send a crew out to investigate.”The low-maintenance nature of the solar panels is one reason the project has been able to keep its environmental footprint small.During planning and construction, the site was found to be a habitat for the Mojave Desert tortoise. The project included creating a temporary habitat for the tortoise and creating pathways for the animal in the fencing that surrounds the power plant.In another environmentally friendly move, the photovoltaic panels were built to follow the natural undulations of the land on which they are built, allowing the vegetation to return to its natural state.To minimize environmental effects, the site is designed so equipment requiring maintenance is located along the road that cuts through the center of the land on which the plant is built.There are 54,000 panels that will soak up the sun and provide VEA members with a form of energy that is cheaper than almost all the alternatives.The Community Solar Project is the second utility-scale solar project to be built in Nye County, the first being Copper Dunes near Tonopah.